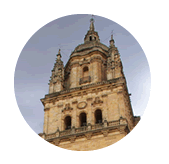 The two towers at the base of the Old Cathedral of Salamanca are known as the Flat-topped Tower and the Belfry Tower.

The former played a defensive role for a large part of its history, while the second was in charge of ordering and marking time for the community. Both would be occupied for centuries by workers of Salamanca Cathedral, such as the bell founders and their families, who lived there until the latter half of the 20th century. The outer fortress-like appearance of the Old Cathedral, surrounded by defensive battlements, earned it the title of “fortis salmantina”.