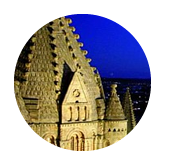 The exhibition “Ieronimus” opened the Medieval Cathedral Towers to the public for the first time. On this route inside the Cathedral Towers, on which corridors and stairways lead us to rooms that had never been visited before, we are offered different views of the city and the whole of the cathedral ensemble from balconies and roofs.

The spaces of the Old and New Cathedrals alike reflect the singularity of this architectural complex that is unique in Spain. The opening of the Medieval Towers of the Cathedral to tourism and the Ieronimus exhibition were the first activities carried out in the city to link Heritage and Tourism. They were supported by collaboration from the Cathedral Chapter and Salamanca Town Council. The positive response from the beginning led to the planning of new extensions to the route and new contents, together with participation in other celebrations to involve the whole of the city. Heritage, cultural, and exhibition activities and their administration constitute a model followed by other bodies from Salamanca and elsewhere. Ieronimus inaugurated a way of working that is being continued.

Since its inauguration in March 2002, the exhibition “Ieronimus. Medieval Towers of the Cathedral” has continued to open new heritage spaces to add to the initial route. The exhibition has expanded since its initiation to include the interior of the New Cathedral from its upper balustrade (2003); access to the upper balcony with views of the north of the city (2004); and the outside route on the roofs of the Cathedral that allows the visitor practically to touch the Torre del Gallo. Ieronimus is a living exhibition that is continuously evolving with new contemporary exhibition features that make use of the various artistic languages, the architecture of the city, and the Cathedral Archive. Ieronimus has reflected the major celebrations and events of the city, such as the Centenary of the Death of Father Cámara (2004), Salamanca on the Pilgrims’ Route (2004), the 250th Anniversary of the Lisbon earthquake (2005), the IV Anniversary of the Ieronimus Exhibition (2007), and the current renovation of the rooms devoted to the Music of the Cathedral, the Archives and Archivists, the Constructive Memory, and the Architecture and Restorations of the Cathedral. The celebration in 2013 commemorated the V Centenary of the Construction of the Cathedral 1513-2013.

For the pilgrims of the Apostle Santiago the years of great pardon are known as jacobeo years, which ever since 1181 and according to the papal bull of Alexander III, Regis Aeterni, have been celebrated when the Apostle’s Festival (25th July) falls on a Sunda,y as was the case in 2004. Of all the roads that bring the pilgrim to Santiago, those with the strongest links with Salamanca are the southern or Mozarabic ones that reach Santiago on the Vía de la Plata or Silver Route. “The Cathedral. The way of the spirit” was the title of the special Ieronimus exhibition of that occasion.

Centenary of the death of Father Cámara

Friar Tomás Cámara y Castro, who was born in 1847, was one of the most influential personages during the period of the restoration of the Spanish monarchy in the late 19th century. In 1885 he was appointed Bishop of Salamanca, a post he held until his death in 1904. Ieronimus paid tribute to Father Cámara in 2004 with an exhibition in the Governor’s Room as a small sample of the indelible memory he left in the diocese and the city of Salamanca itself. To him we owe the construction of the Church of San Juan de Sahagún (the patron saint of the city), the restoration of the Colegio de Calatrava, and the initiation of the works of the Basílica de Santa Teresa in Alba de Tormes, together with the Hospital de Santa Ana in Macotera. Apart from his ecclesiastic activities he was also a writer and a politician.

250th Anniversary of the Lisbon earthquake

The anniversary of the earthquake was celebrated with various events. In the heart of the Belfry Tower, the Vault Room, there was an exhibition accompanied by an audiovisual that was projected on one of the surviving cracks to simulate and relive the tremor. A drawing competition and a bell concert completed the commemorative activities.

500 years since the beginning of the construction of the New Cathedral.

The Cathedral turned to this celebration with a wide program of commemorative events.