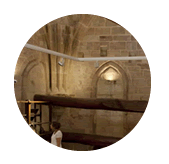 In the 1970s the bells began to operate by electricity, which led to the disappearance of the profession of the bell founder, the last vestige of the cathedral employees at the service of the Chapter.

This led to a change in the use of the Towers, which had up to then been conditioned as the dwellings of the bell founders and their families. It was in 1998 when the initial phase of the restoration of the interior of the towers was begun; this work was completed in December 2001. This project, which was part of the Cathedral Restoration Plan, allowed visitor access for the first time. The Cathedral Towers were opened to the public as the Ieronimus exhibition in March 2002.